A Pie chart is a statistical graphic where a circle (pie) is divided into slices to illustrate numerical proportion of the observed values. In a pie chart, the angle and area is proportional to the quantity it represents. What this means is that the pie chart first and foremost represents the size relationship between the parts and the entire thing.

Despite pie charts are widely used in the business world and the mass media, they have been often criticized as researches showed that people’s confidence when reading numbers from pie charts is lower than from other kinds of charts. As a consequence, set of data to be displayed in pie charts need to be relatively small so to limit number of slices and to allow the viewer to get an overview without having to try to read the chart values in detail.

It is worth noting that pie chart representation should be used only if the observed set sums up to a meaningful whole. As an example, it makes no sense to show five different car models in a pie chart, because there are obviously many more missing. However, if a company has three divisions, a pie chart can be used to show profits per each division being the sum of all the slices/divisions the total profits of the company.

As typical example, consider the world population per continent.

To create a Pie Chart within Grapheme, click on 2D Charts → Pie from the toolbar of the Chart Explorer. Assign a name to the data series, select the Source Table and the View of the table containing the desired data sets. Select which columns should be used to define Pie Sector categories and values. Move to the Aspect tab to rotate and explode Pie sectors.

To show the Pie proportions as Donut, access the Edit Chart wizard from the chart toolbar and check the Donut option in the Chart tab 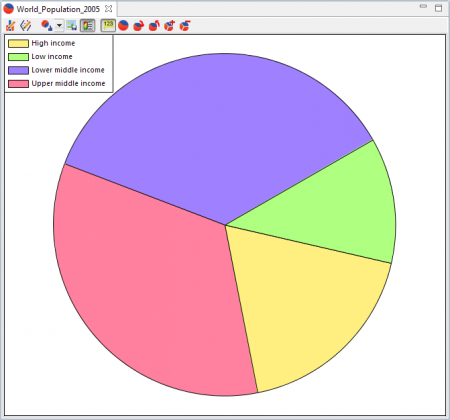 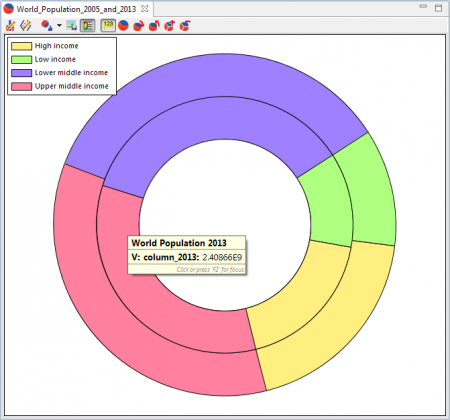