A ternary plot or de Finetti diagram is a barycentric plot which depicts the proportion of three variables that sum to a constant as positions in an equilateral triangle using so-called barycentric coordinates. The representation of data as a ternary diagram has the obvious rationale of condensing three variables in a two dimensional plot. This is particular useful in specific physical chemistry, mineralogy, metallurgy and other physical sciences to show the compositions of systems composed of three different species. Such diagrams are encountered often in the study of phase equilibrium.

Within a Ternary plot every point represents a different composition of the three components. The concentration of each species is 100% (pure phase) in each corner of the triangle and null at the line opposite it. The percentage of a specific species decreases linearly with increasing distance from this corner.

To create a Ternary Plot within Grapheme, click on 2D Charts → Ternary from the toolbar of the Chart Explorer. Assign a name to the data series, select the source table and the view of the table containing the desired data sets. Select which columns should be used to define the X, Y and Z axes. 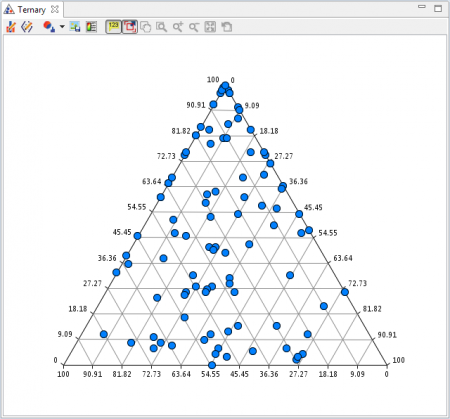