Comparison tests for the One-Way ANOVA

The One Way ANOVA is a statistical procedure used to determine whether the mean of three or more samples are statistically different. In case the results of the analysis shows any evidence that the means of the population differ, a comparison test can be performed to determine which means among the ones analysed differ from the rest.

Different comparison methods exist and they differ for the distribution function the method are based on and for the way the overall significance level is calculated.

Some of the most commonly used comparison procedures are:

In case the different samples can be assumed to have equal variance, one of the first two methods can be used; the third one should be used instead in case the assumption of equal variance cannot be made.

If the p-value obtained at the end of the test is less than the adopted significance level, the Null Hypothesis should be rejected in favour of the Alternate Hypothesis.

More details on the Comparison tests for the One Way ANOVA can be found here:

Suppose a university Professor wants to compare the test scores of the end-semester exams, for the following groups of students attending his lectures:

A One Way ANOVA test performed on the three samples produced a p-Value of 0.014. Being the p-value less than the adopted significance level of 0.05, the Professor should reject the null hypothesis and conclude that at least one student group performs different from the others.

The professor decides to perform a comparison test to determine how the three samples compare to each other. He chooses to use the Tukey method with a family error rate of 5%. The test produces following results:

The test results show that there is sufficient evidence to indicate that the students attending the online lecture performs different from the one attending the morning and afternoon lectures.

To perform a Comparison test for the One-Way ANOVA in Grapheme, click on Create New Analysis from the toolbar of the Statistical Analysis View. Assign a name to the panel and select “One-Way ANOVA Comparisons” from the list. Click on Next.

In the "Sources" tab add a column for each sample you want to include in the analysis and select, for each of them, the source table, the view and the view column.

Move to the "Configuration" tab and define the following analysis settings: 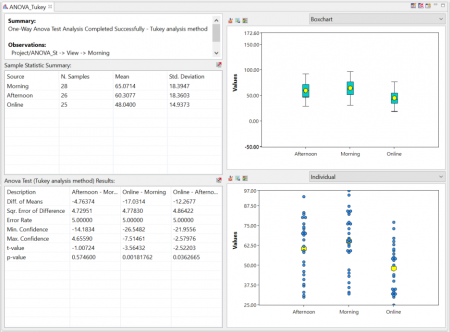