Any Hypothesis test in statistics requires the definition of a null hypothesis and an alternate hypothesis. The goal of the test is to aid the analyst in deciding which one of the two hypothesis is true. The table below shows a common set of choices for the null and alternate hypothesis for a correlation coefficient significance test:

More details on Correlation analysis and related significance tests can be found here:

Let’s say we want to evaluate the degree of relationship, for a selected set of Countries, between GDP per capita and different population indicators such as urbanization and life expectancy. We run a correlation analysis on a set of 75 countries for the indicators under investigation. We obtain following results:

Being the p-value less than the adopted significance level of 0.01, we should reject the null hypothesis and conclude that a significant correlation exists between the GDP and the selected indicators.

To perform a Correlation analysis in Grapheme, click on Create New Analysis from the toolbar of the Statistical Analysis View. Assign a name to the panel and select “Correlation Analsysis” from the list. Click on Next.

In the Sources tab, select the Source Table from the ones available in the Tables view, select the view of the table and the columns you want to include in the correlation analysis. Click on Next.

In the Configuration tab, select one or more kind of correlation analysis (Kendal, Pearson and/or Spearman) and Click on Finish. 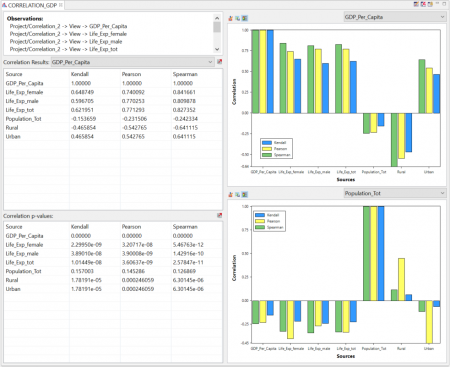