Many statistical procedures, including correlations and t-tests, rely on the assumptions that the analysed data set is normally distributed. To determine how likely it is for a random variable underlying the data set to follow a normal distribution, a normality test is usually performed. Types of normality tests include:

More details on Normality testing can be found here:

Suppose an engineer for a manufacturing company wants to verify whether the steel shafts produced by a certain manufacturing process have a mean diameter of 55 mm. He has measured the diameter of 40 random samples and he wants to assess whether the selected diameters follow a normal distribution before performing an hypothesis test on the mean.

A normality test performed on the sample produces a p-value, for the Anderson-Darling test, of 0.89. Being the p-value greater than the adopted significance level of 0.05, the engineer fails to reject the hypothesis that the data follow a normal distribution (i.e. the engineer does not have enough evidence to conclude that the data do not follow a normal distribution).

To perform a Normality Test in Grapheme, click on Create New Analysis from the toolbar of the Statistical Analysis View. Assign a name to the panel and select “Normality Test” from the list. Click on Next.

In the Sources tab, select the Source Table from the ones available in the Tables view, select the view of the table and the column you want to analyse. Click on Next.

In the Configuration tab, select one or more test methods and Click on Finish. 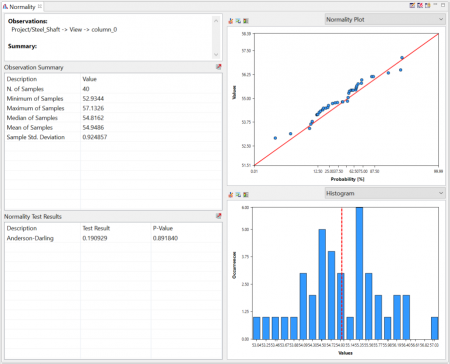