More details on the One-Sample t- and z-test can be found here:

Suppose a manufacturer wants to determine whether the cakes produced by a new manufacturing process weigh 3.0 Kg on average. He randomly selects 50 cakes from the 1000 produced in his factory in a day. A One-Sample t-Test can be performed with following hypothesis:

The 50 cakes selected have a mean of 2.9 and a standard deviation of 0.2. The results of a one-sample t-test indicates a p-value of 0.001. Being the p-value less than the adopted significance level of 0.05, the manufacturer should reject the null hypothesis and conclude that the difference between the sample mean and the hypothesized mean is statistically significant.

To perform a One Sample Test in Grapheme, click on Create New Analysis from the toolbar of the Statistical Analysis View. Assign a name to the panel and select “One Sample Test” from the list. Click on Next.

Select the Source Table from the ones available in the Tables view, select the view of the table and the column containing the sample you want to analyse. Click on Next.

If you want Grapheme to evaluate the confidence interval range, check the setting Compute Confidence Interval and insert the probability value to be used for its evaluation. Click on Finish. 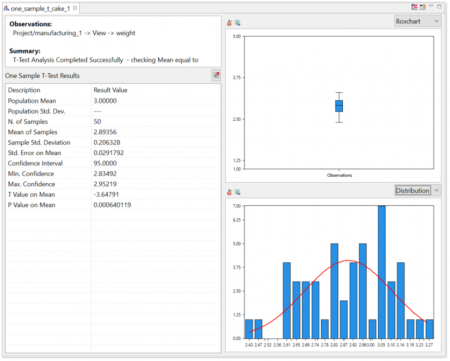