The Paired t-test is a statistical procedure used to determine whether the mean between two paired samples are statistically different.

More details on the Two-Sample t-Test can be found here:

Suppose a scientist, working for a pharmaceutical company, wants to prove the efficacy of a new treatment for high blood pressure. He designs a clinical trial with 30 patients who have been administered with the new medication and he measures the blood pressure, for each patient, before and after the treatment.

The scientist performs then a paired t-test and obtains the following results:

Being the p-value less than the adopted significance level of 0.01, the scientist should reject the null hypothesis and conclude that there is a statistically significant difference between the blood pressure measured before and after the treatment.

To perform a Paired t-Test in Grapheme, click on Create New Analysis from the toolbar of the Statistical Analysis View. Assign a name to the panel and select “Paired T-Test” from the list. Click on Next.

Move to the "Configuration" tab and check the condition (or alternate hypothesis) you want to verify. If you want Grapheme to evaluate the confidence interval range, check the setting Compute Confidence Interval and insert the probability value to be used for its evaluation. Click on Finish. 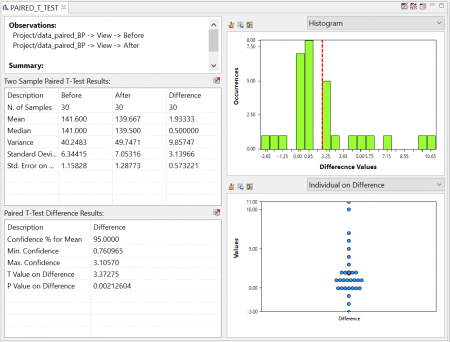