A Radial (or Spider) Chart is a common way of visualizing multivariate data. A Radial Chart shows a set of points in an n-dimensional space via a backdrop of n radial lines, typically equally spaced representing a plot dimension each. A point is thus represented as a polyline with vertices on the radial axes where the position of the vertex on the i-th axis corresponds to the i-th coordinate of the point. This gives the plot a star-like appearance.

As an example, we can use a spider chart to compare 10 different models of washing machines. The chart will have the following axes: Price, Capacity, Mash Spinning Rate, Average Electric Consumption, Number or available Washing programs, Average Water Consumption, sold units. We can draw each model as a separate line of the same Radar chart for a direct comparison of the different models, attempting to understand the different patterns. We can for example discover that more expensive models overcome the others in terms of Capacity and Average Washing programs but not necessarily in terms of Consumptions and clearly not in terms of sold units.

To create a Spider Coordinates Chart within Grapheme, click on 2D Charts → Radial from the toolbar of the Chart Explorer. Select the Source Table and the View of the table containing the desired data sets. Select which columns should be used to define the parallel coordinates chart Intensity. Move to the Aspect tab of the wizard to add and/or remove table columns. 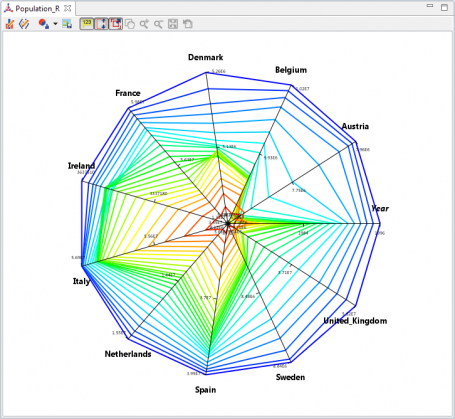 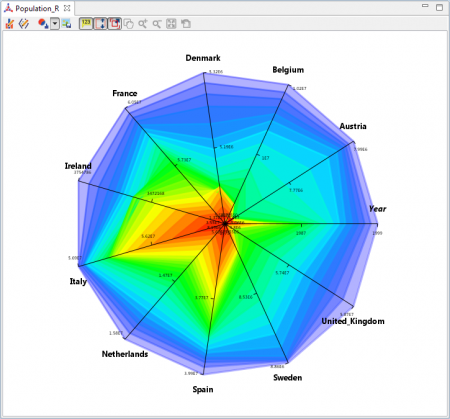