Typical examples of regressions are so called trend-lines. A trend line represents the trend of a dependent variable against an independent one. It tells whether a particular data set (say stock prices) have increased or decreased over positive variations of the independent variable, typically the period of time. Trend lines are sometimes used in business analytics to show changes in data over time. This has the advantage of being simple allowing to interfere consequences for a particular action or event.

To create a Regression Line within Grapheme, click on 2D Charts → Scatter from the toolbar of the Chart Explorer. Assign a name to the data series, select the Source Table and the View of the table containing the desired data sets. Select which columns should be used to define the X and Y axes.
Click on the New Regression Line icon, move to the series selector on the left side of the wizard and click on the regression series.
Access the Regression Line editor by clicking on the icon next to the Y column selector, a wizard will guide the user in the selection of the regression algorithm and corresponding setting options. 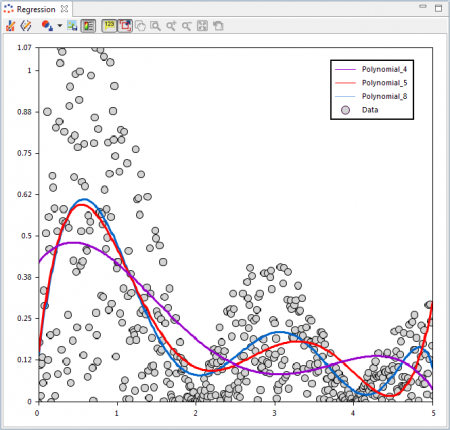