The two-sample t-test is a statistical procedure used to determine whether the mean of two independent samples of data are statistically different.

More details on the Two-Sample t-Test can be found here:

Suppose a laptop manufacturing company has two assembly lines assigned to the installation of the LCD displays. The manager wants to evaluate whether the two assembly lines performs differently by comparing the time it takes for each line to process a single laptop.

Being the p-value greater than the adopted significance level of 0.05, the manager doesn’t have enough evidence to conclude that the difference between the two assembly line means is statistically significant.

To perform a Two-Sample t-Test in Grapheme, click on Create New Analysis from the toolbar of the Statistical Analysis View. Assign a name to the panel and select “Two Samples T-Test” from the list. Click on Next.

Check the condition (or alternate hypothesis) you want to verify and define the Test Settings as follow: 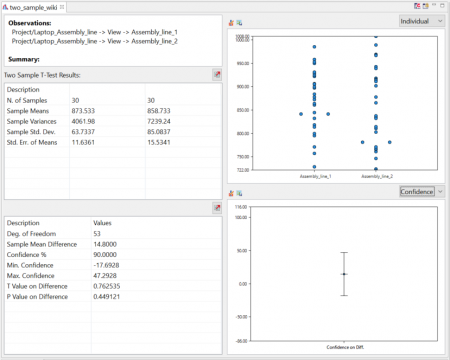