Any Hypothesis test in statistics requires the definition of a null hypothesis and an alternate hypothesis. The goal of the test is to aid the analyst in deciding which one of the two hypothesis is true. The table below shows the null and the alternate hypothesis defining for each test performed during a Two-Way ANOVA Comparison procedure:

If the p-value obtained at the end of the test is less than the adopted significance level, the Null Hypothesis should be rejected in favour of the Alternate Hypothesis.

More details on the Two Way ANOVA can be found here:

Suppose a production quality engineer, working for a food company specialized in confectionery, wants to evaluate how the units produced weekly perform against the location of the factory and the level of automation used on the production line.

The company has to factories, one in Manchester and one in Liverpool, and each factory is currently testing three different type of production lines with different levels of automation (minimum, medium and high level).

He performs a Two-Way ANOVA analysis which produces following results:

Based on the adopted significance level of 0.05, the engineer can draw following conclusions:

To perform a Two-Way ANOVA in Grapheme, click on Create New Analysis from the toolbar of the Statistical Analysis View. Assign a name to the panel and select “Two-Way ANOVA” from the list. Click on Next.

In the Sources tab select the source tables, the views and the view columns to be used as Response, Factor 1, and Factor 2.

Move to the Configuration tab and define the following analysis settings: 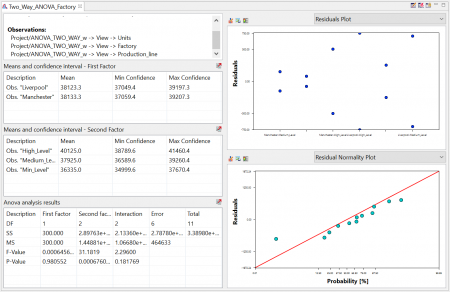